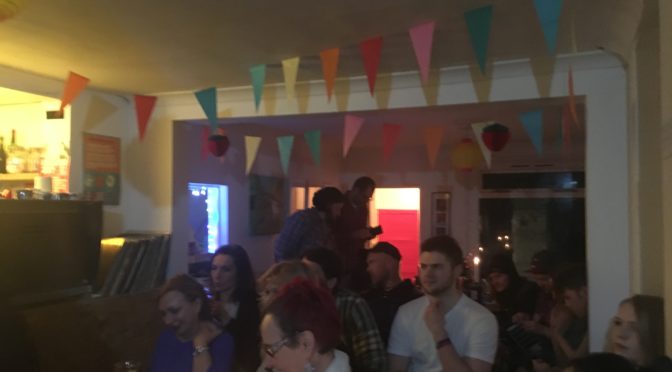 On Friday morning while I was having breakfast, I googled for open mic stand up comedy Brighton. There it was, Junkyard Dogs was the place at 7pm. I shoot organizer and email and excitement started to grow in my belly.

I have been doing stand up comedy in Croatian for six years, but only last two should be counted for. I have never done it in English. During conference breaks, I prepared my three bits and isolated punchlines that I need CORRECTLY to translate in English.Person on the right was Irish so I asked person on my left for help because he was an English.  He was happy to verify my translation. I was set to go.

I arrived at 6.30 PM. Another thing that I was interested in was to meet Brighton stand up comedians (amateurs like me). What are they thoughts and drives about stand up comedy. 21 people applied (in Zagreb we usually have up to 8 people and Brighton is three times smaller than Zagreb), and they were most of the audience (some brought relatives or friends). Also, I was interested how was open mic conceived.

EVERYBODY was extremely friendly to me. This was very important for my confidence.

Act had 5 minutes time limit. My first English act went very well. Most of my punchlines got laugh, one that were not related to English “known things” did not. That was expected, by I also wanted to execute negative test case.

I had trouble to understand all the jokes because of local accent, English facts and talking speed.

What I learned on Testival #28 meetup

What I learned on TestBash Brighton 2017 Open Sessions