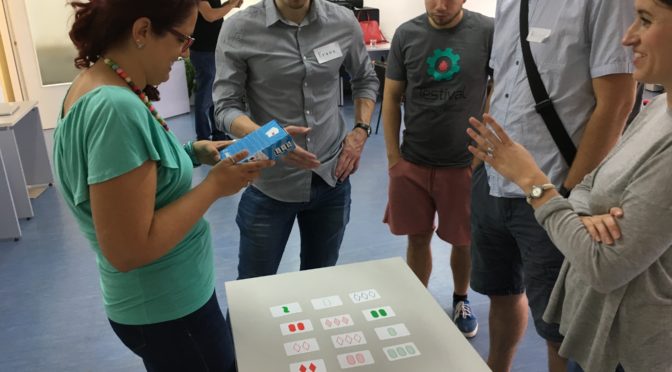 This post is about opening keynote and open sessions that I attended.

We gathered 40 software testers, which is 20% increase! Alex Rodionov open keynote was about Testers Anxiety. Which was hit to bulls eye because every software tester experienced that.

Software testers usually first spot contradictions in the product which makes them alert and that leads to Anxiety. Alex stated how can you identify that you are lousy tester, if there are bugs in product that you missed. Very simple. I like statement that programming is analysis decomposition, and software testing is composition analysis. Testing is like art. In testing, you should never stop looking for answers.

Then Alex switched to automation in software testing. He mentioned testing pyramid and asked question do we automate too much/enough? Do we trust our automation checks? Software testing is less deterministics and involves many checks, while in automation there is only one check. Then he explained model based testing that is smarter way to do automation.

Second session was about software testing tools that we use in daily jobs and issue that we had by using those tools. I learned about Web Shaper and Charles proxy. Also, Chrome dev tool throttle does not give real results. There was idea proposed by Marko that it would be much better to connect mobile devices to “shitty router”.

During the lighting talks I presented Black Box Testing Machines that could be found in this excellent blog post by Katrina the tester. Post presents various games and puzzles that are used in teaching the software testing.

Zeljko presented Scratch, Vim, and why you should not go to the conferences.

Marko presented impressive set of Jenkins jobs and created on the fly new testing environment by clicking one job!

In UX testing session, discussion whent to the direction which tools are used for user behaviour analysis.

Last session was about state of the selenium. Selenium team will no longer support Browser drivers, that is now vendor responsibility. Selenium conf and Watir Bazar are excellent conferences and if you want to write maintainable browser automatization in Ruby, you should read Cucumber and Cheese book.

In closing session we shared our AHA moment and gave away a set of Test Sphere cards!