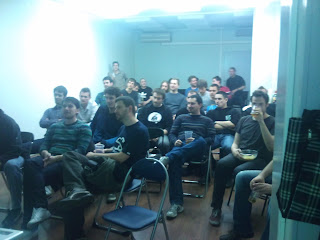 Using Grinder TCPProxy, I recorded http data while loading Code At Six home page (github grinderShowCase project). Audience reaction was pretty good, and of course main request was to try to crash Code At Six homepage. Of course we only created a load of two concurrent users, and presented grinder test reports.
After the hands on lectures, we formed smaller groups to discuss various topics about web development.
I am very proud that I was given a privilege to talk in front a such smart audience.