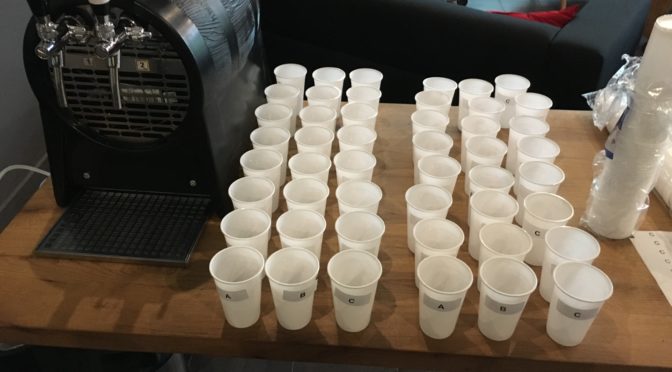 This post is about my learning experience on latest Testival meetup.

We had two talks and one 5 minute talk. We started with traditional introduction of every participant. Repsly was again event sponsor.

Code is on github, and they use branching and pull requests for deploy strategy.  CI system is Semaphore and Code Climate is set of open source Ruby libraries for code analysis.

Nova Runda is one of the first Croatian micro brewery, they are known for their Indiegogo campaign through which they raised money to brew their first commercial beer, APA.

The best beer is one that always taste the same. Striving to that path, they started A/B beer testing. They presented two beers in three cups, A,B,C. They wanted to get statistics how many participants guessed which cups hold same beer. Participants were forbidden to do any commenting while testing the beer (no influence on other participants).

9 of 23 participants noted the difference. The number needs to be 12 so they can claim that they produced same beer in two different batches.

This is known as difference test. Preference test is subjective test. It gives answer which beer is prefered by the tester.

Yes/no test is acceptance test. Is this beer good enough to sell it?

What is beer quality?

As a regular user of Vim, I suggest you to try this ultimate Vim distro. and start with basic tutorial found in Zeljko’s blog post.

vim, show me your colors!