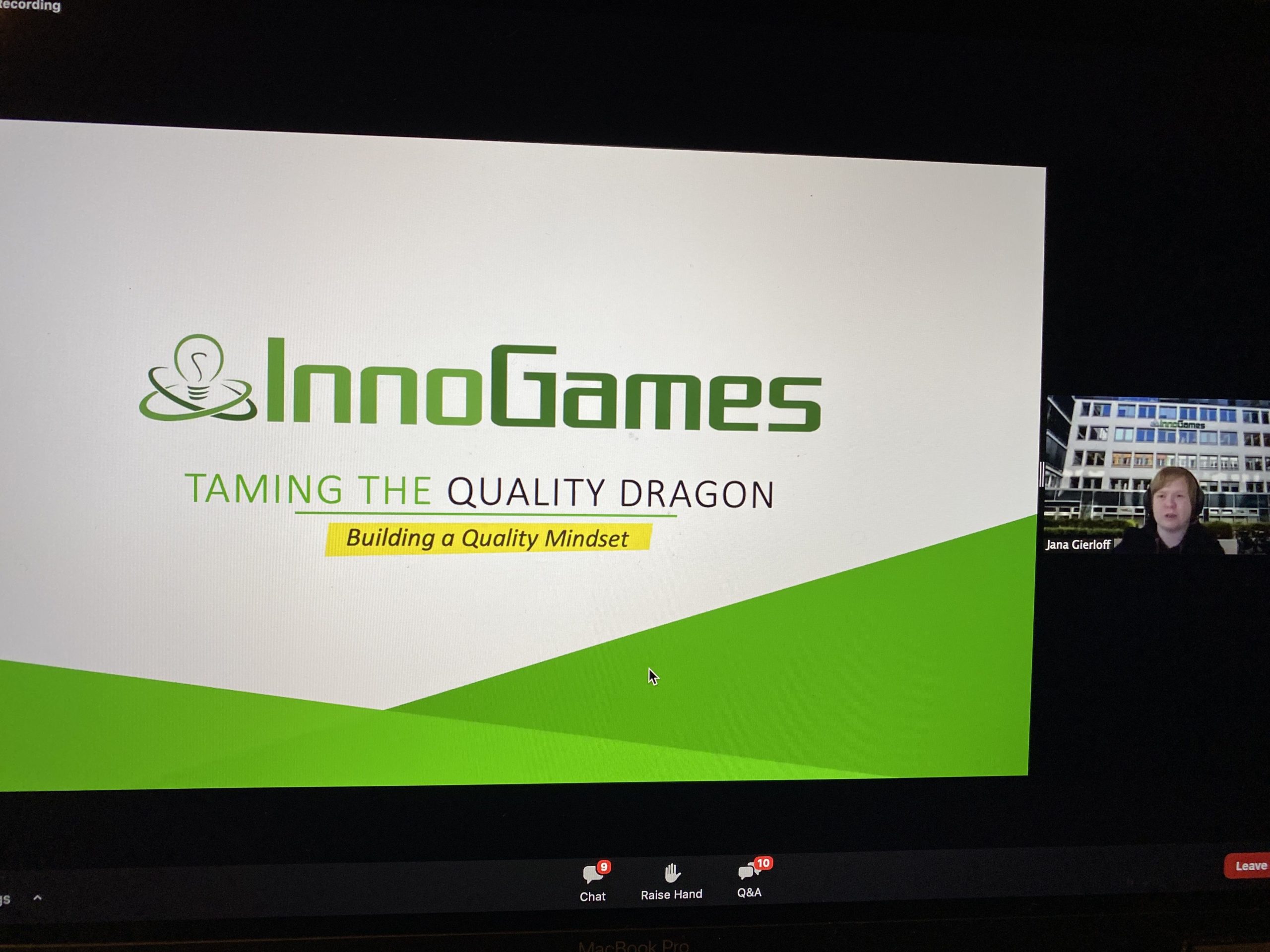 In the previous post, we gave a report on Discussions Testers Should No Longer Be Having by Mike Lyles. Today we bring a report on Taming the Quality Dragon by Jana Gierloff, the third session of Online Test Conf Autumn 2020 first day sessions. Five steps to implement QA Vision in Inno Games

This talk is about the 5 steps the Inno Games team took to implement this QA Vision, how they built a QA. Philosophy and how this approach is being adopted by all teams and members of the QA department. A powerful QA Vision and Philosophy. 5 Steps to Build a Quality Mindset. How to go from being the bottleneck to become a champion of quality.

Inno Games is a German gaming company. I heard of them on HackerNews, where somebody shared that they are hiring. Jana is now a testing coach. QA team has sixteen testers, and there are 105 developers. But they are not worried about ratios :).

To understand software testing problems at Inno Games, Jana started with Creatures. Those creatures have different properties; for example, they could be invisible during the day and night. Those strange properties are essential for Game increased gameablilty. They realized that an important software tester skill is the observability of gameplay. For example, what is happening in this firefight? Is this expected behavior (what is expected behavior is another software testing problem).

With such complicated software observability problems, they realized that software “quality” should be the team’s responsibility. The whole team set the testing mission:

They based development on features (one of the Agile team indicators), so the developer feature is done only when tested and running in production. The decision was that software testers should assist developers in providing feature quality.

All starts with the company mission. That mission should be communicated to team members. I like that because this is one thing that we teach in the AST BBST Foundations Course; company mission and vision are one of the oracles. Then they set Quality Vission:

That vision helps them with two important subjects:

The second step is the QA philosophy:

QA Philosophy has several goals. Speed and efficiency seem contradictory, but by automating only excise software testing tasks. One line deployment is an example of an excise task. In intelligent quality prediction software testing team tries to look forward and anticipate possible issues with the system and the code. Work estimation is also part of intelligent quality predictions. We can conclude that the common theme of QA Philosophy is CHANGE.

The first two steps would be worthless if there were is no team communication. Using five Why’s questions, the team significantly enhanced push/pull information flow between the teams. With team awareness of what they should build, accepting, and committing to change, communication got significantly better.

Software testers are quality champions that lead by example. They are quality role models, and they ask questions, teach, and train the whole team about QA. Doing root cause analysis, they identify important problem causes.

For this session, I was using the Testivator Mobile application. I took 46 notes and 7 screenshots.

Here are note types by duration. Till the end is 15.8 %, and it is the ratio of duration from last note to session end and session duration.

Meetup And Learn, Discussions Testers Should No Longer Be Having

Meetup And Learn, A Case of Failure: Pinpointing A Problem for Correction