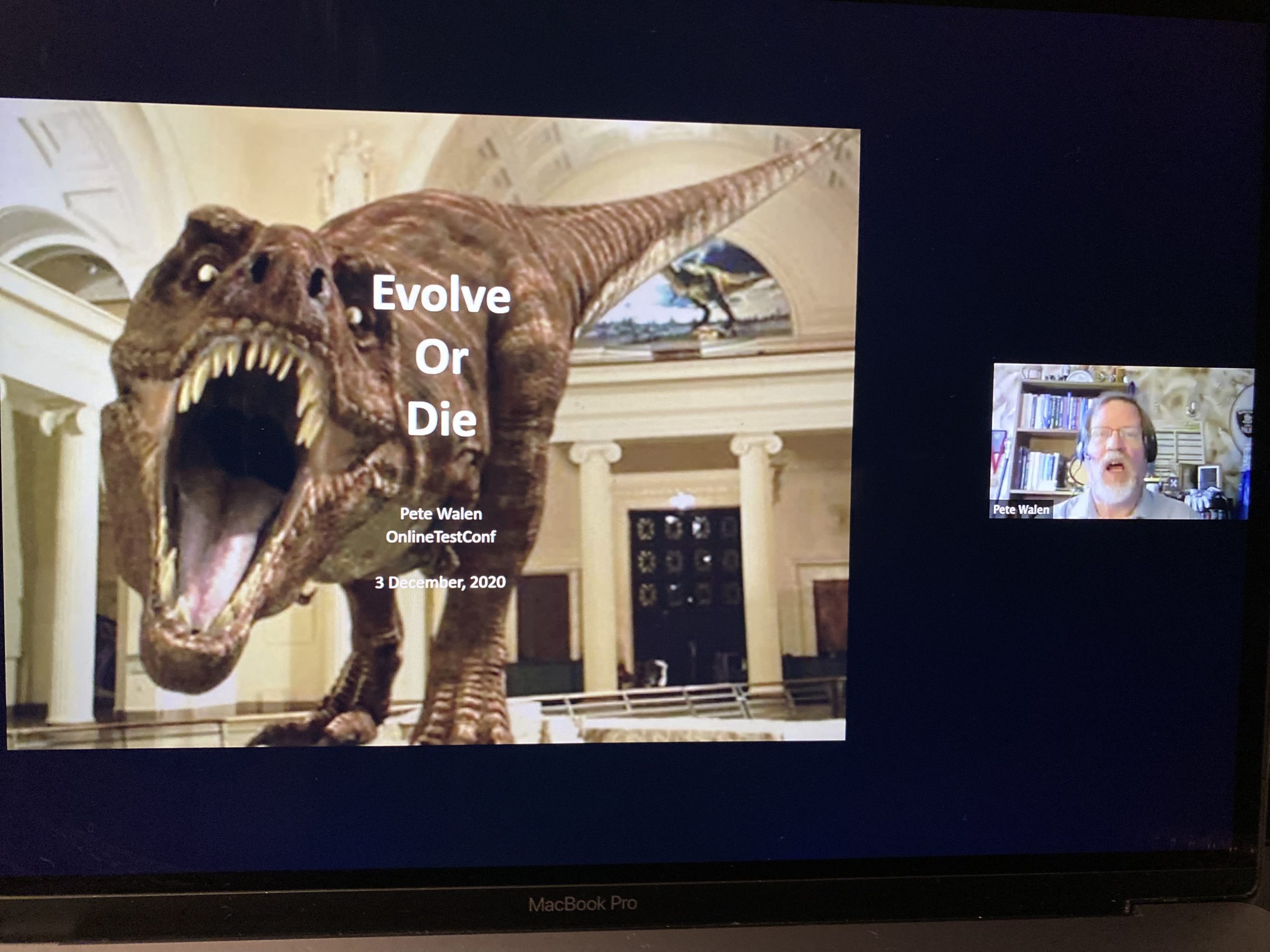 In the previous post, we gave a report on A Case of Failure: Pinpointing A Problem for Correction by Maaret Pyhäjärvi, the last session of Online Test Conf Autumn 2020 first day sessions. Today we continue with third-day sessions as the second day was aligned with AEST (Australia) time zone, and it was too early in Croatia. This is a report on Evolve or Die: Testing Must Change by Peter Walen. What should we do with software testing practices that make testing slow, expensive, inefficient, and ineffective?

In 2011, Alberto Savoia proclaimed “Test Is Dead”; at GTAC. His presentation was “controversial”; Many people involved in software testing denounced it. The problems he pointed out still exist at many companies. Some practices make testing slow, expensive, inefficient, and ineffective. Companies and people cling to them as the “right way to test” even when evidence shows otherwise.

Peter is another excellent storyteller. Check out his blog Rythm Of Testing to read his stories. We must not be software testing extinction monsters. Alberto Savoia proclaimed, “Test Is Dead,” and I remember that this was not correctly understood by the software testing community.

Jurrasic Era Of Software (aka Waterfall)

In the Jurassic Era, we had a process and sign-offs between stage-gates. Everything was predictable with high accuracy.

Even for smaller changes, we needed variations in agreements between sign-offs. It was possible to design all possible paths of execution through the code before writing a single line of code. Bugs were an important metric.

Ok To Be Late

And most importantly, it was ok to be late.

Why? Because the software testing gate-phase could be shortened. Every software artifact had its own specified box. Software artifacts were the king, and there was no need for communication because the heuristic was that everything is defined in those artifacts.

What Google meant with the message that Test Is Dead? If you recap the Jurrasic Era story and find your’s software testing in it, you are doing it wrong. Actually, many software testers are still doing it wrong. And this “Wrong Testing” is still very alive. Google claimed in 2011 that this kind of testing is dead in Google.

First, we need to change the collaboration.

Three ring binder is is bad way to communicate.

The root question is, Why are we doing this project? If we have five requirements and create five test cases based on those requirements, this is not good enough. In today’s software development, we need to forget about checking boxes because we will miss important issues.

In a TV Show about detective Columbo, his punchline during the investigation was

I have just one more question.

Test more than just code because people are biased. And what is software testing?

Joel started the Q&A session with a fact check:

Many software testers do not want to evolve or are too frightened to change.

Sofware tester’s that are comfortable in their current job will not change even if they want to change. It is important to understand what are developer problems. Joel started his code review experience:

In a code review, do code paths but not what could be automatically caught by the compiler or static code analysis tools.

And my question for Peter:

For this session, I was using the Testivator Mobile application. I took 42 notes and 10 screenshots.

Here are note types by duration. Till the end is 9.1 %, and it is the ratio of duration from last note to session end and session duration.

Meetup And Learn, A Case of Failure: Pinpointing A Problem for Correction