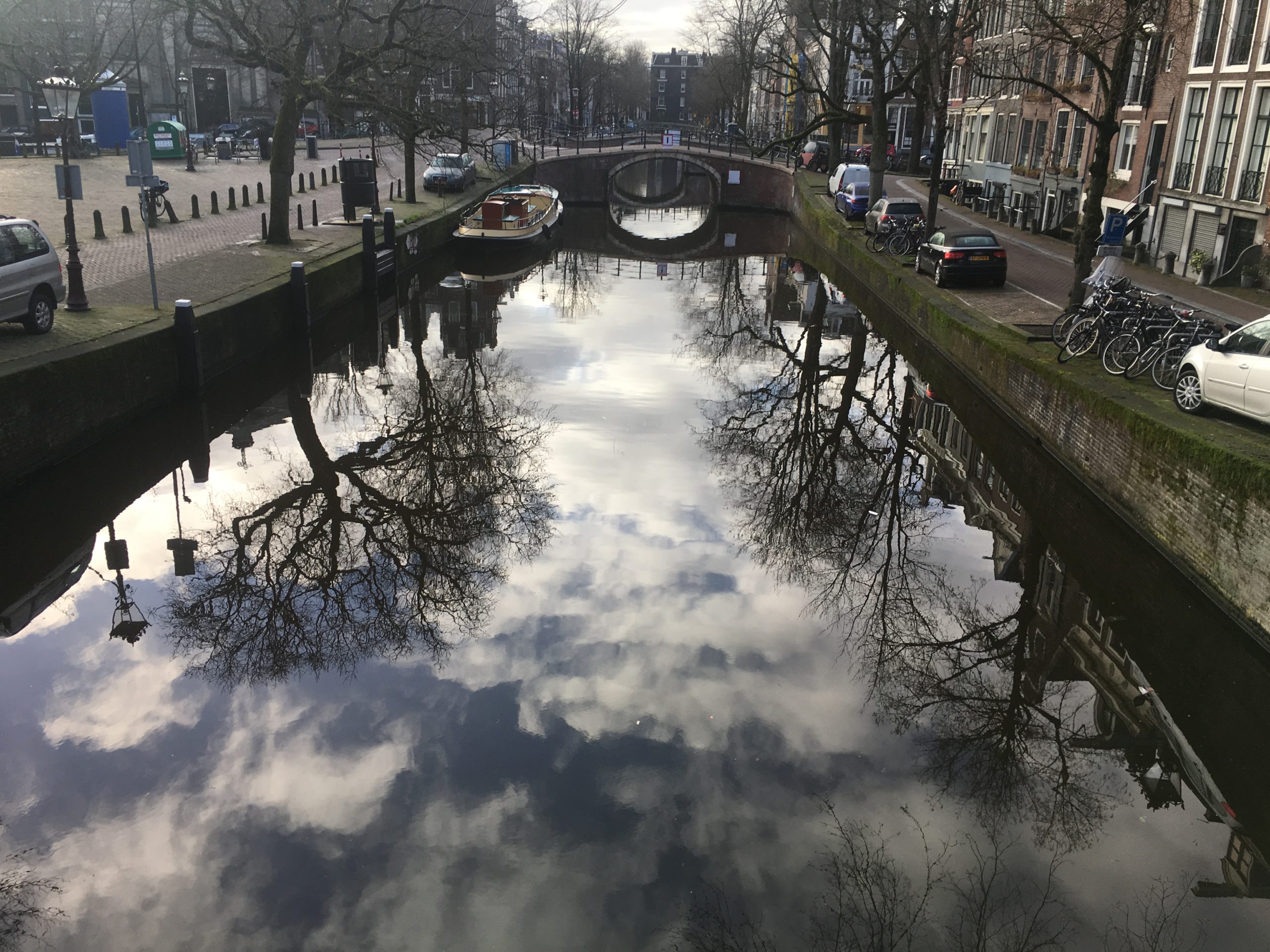 This is the story of the 3rd-day journey at ETC2020 held in Amsterdam. On Wednesday, I finished my leisure time with a visit to ARTIS Zoo. Conference warm-up started with Meetup hosted by ING at their new premises.

Weather was beautiful again, so I decided to spend a day at ARTIS ZOO. This is my second visit to this beautiful patch of the animal kingdom. I walked there from the hotel and took the above photo by pure chance because I consider myself and my iPhone 6s camera as the worst possible duo for taking pictures.

In ZOO, I also bought a map (which is actually donation), and I started my exploratory tour. My tour was from the map upper left corner towards the plan lower right corner. Despite that some parts were under maintenance, it still took me four and a half hours to finish this tour.

Time for break and lunch, the place was opposite the Zoo. Having enough cash as a backup, I thought that nothing could go wrong. I first found out that I was there during their afternoon closing time from four to five (I entered before 4). When I asked for a check, I noticed that the waiter brought with him the POS terminal. The card was rejected. In confidence, I offered cash, but the bistro does not accept CASH! I was in deadlock. By doing the dishes or testing their POS terminal in my mind as compensation, in the end, they took the cash because I luckily had small bills (thank you ABN AMRO for having an option on ATM to choose smaller bills as a payout option.)

I came earlier to the Meetup, so I had a chance to have a few words with one of the organizers, Roger. 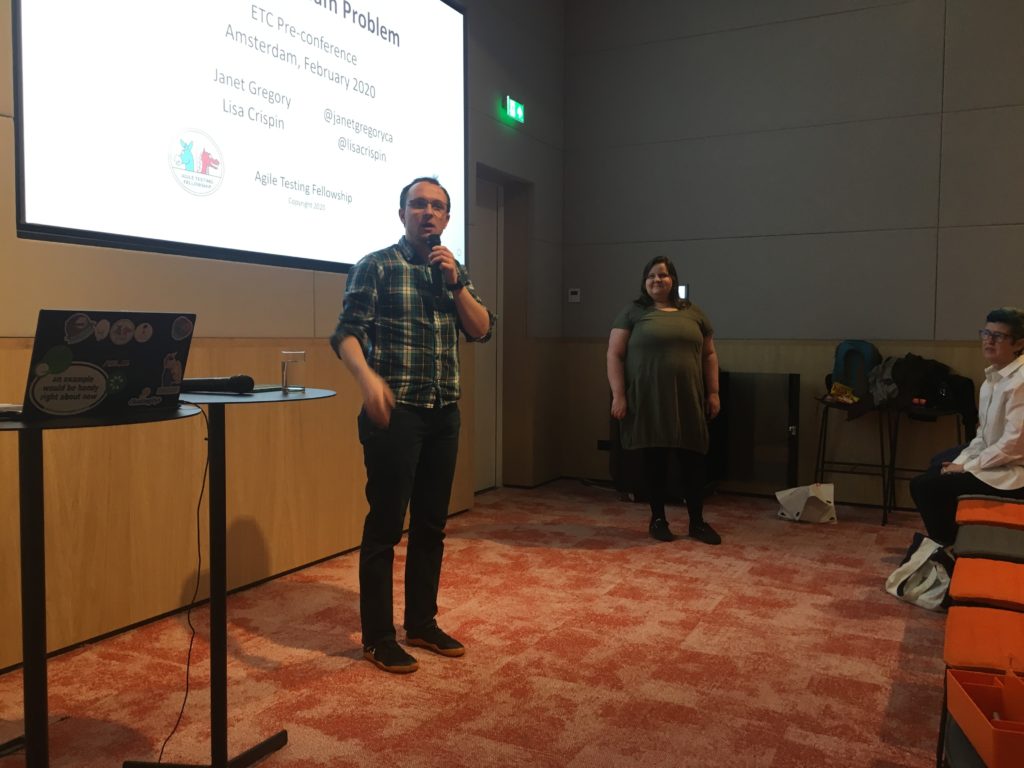 Testing Is A Team Problem

ING is a bank, and the Meetup was held in their new building near the conference place. Janet Gregory and Lisa Crispin talk was Testing Is A Team Problem. 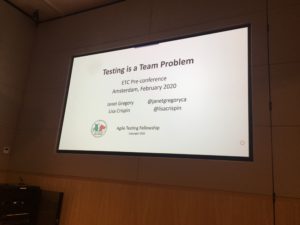 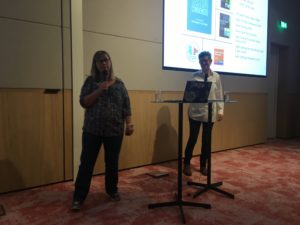 So how to persuade your Waterfall team that testing is a team problem? James Bach states that quality could not be measured, only assessed. If you have been a tester for some time, you probably have proof from your experience that this is a credible statement. Janet said that Brent Jensen talks about shippable quality. Create a product and deploy is so the customer could asses quality. We are all in agile business, and contrast to Waterfall project lifecycle, in agile:

Testing is an activity, not a phase.

I still consider Waterfall a valuable lifecycle for some context. For example, you can not create 5G mobile technology using agile.

In an Agile team, developers should think about software testability, and testers’ job are what if questions. We have a role called general specialist, where at the beginning, that role increases its basic knowledge in step curve. Advanced knowledge gets to the max value, and after that, we could only gain metaheuristics. So we must share skills by:

Elisabeth Hendrickson in A Thinking Tester presentation, list what tester should be:

After that, Lisa gave an overview of a typical agile tester day:

By test early, we need to test assumptions that we have about the rules and also uncover hidden assumptions. Assumptions are revealed during the creation of the example. And there is a distinction between writing checks (automation) and testing activities. Testing could be:

Testing is the heartbeat of DevOps (Lisa Crispin).

After the presentation, we wrote on stickers our questions for conference presenters (many of them attended the Meetup). This is what stuck with me:

How to try x in a team? Do not tell them what we are actually doing.

Celebrate with shots bug found in production by doing the post mortem analysis.

After that, we had food, and more mingle time, where I had interesting discussions about testing topics. Great intro for the first conference day. 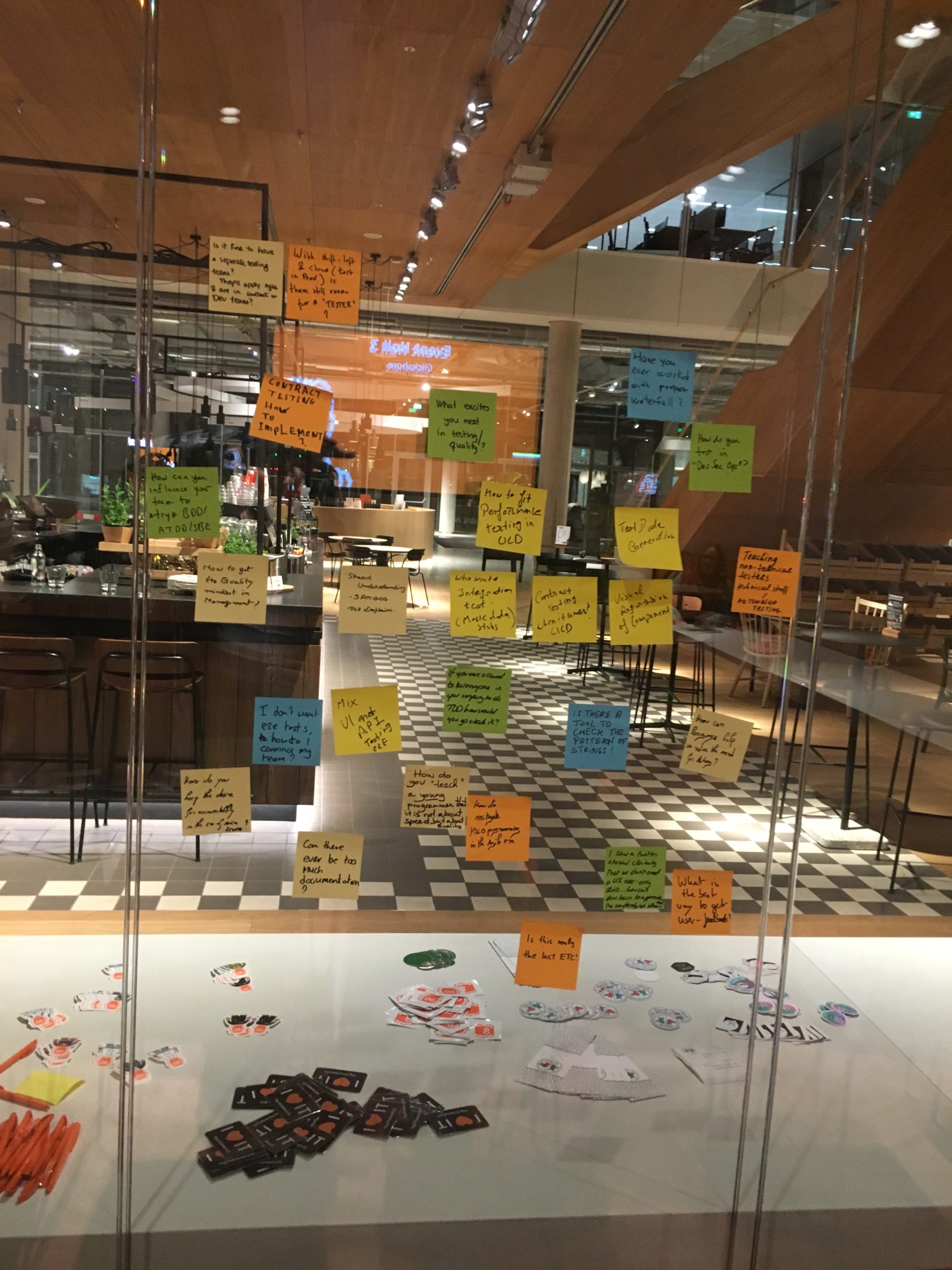 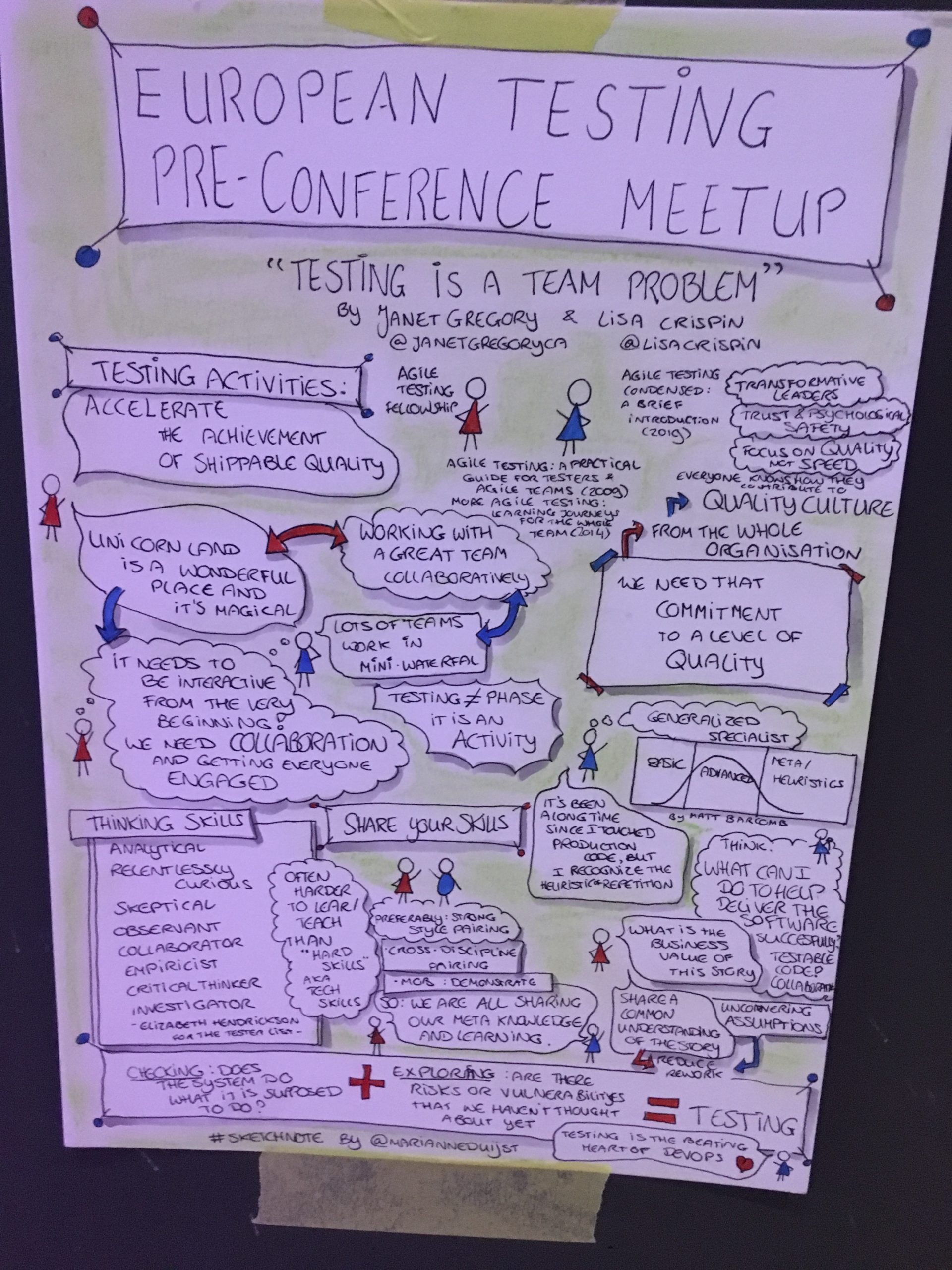 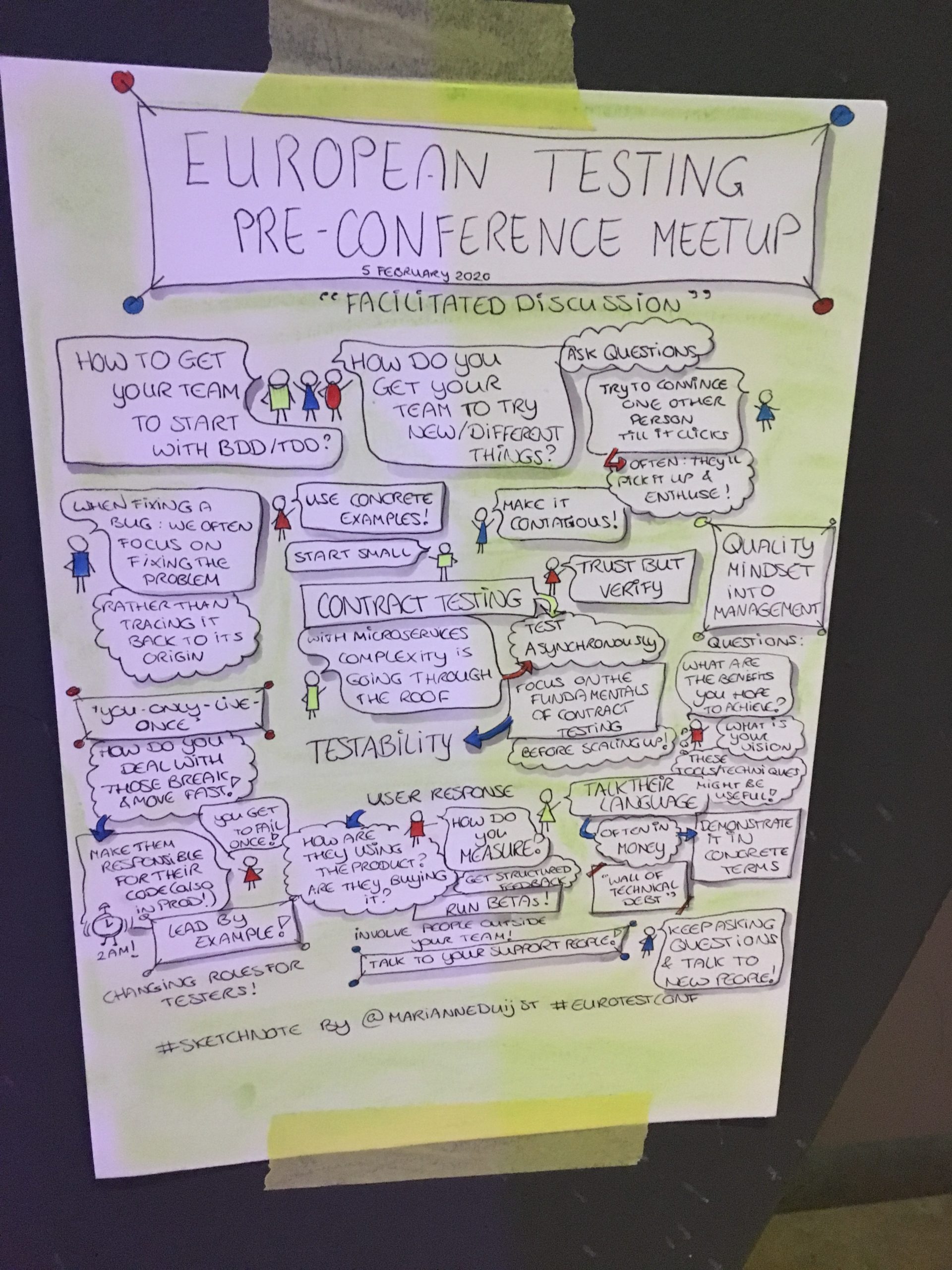