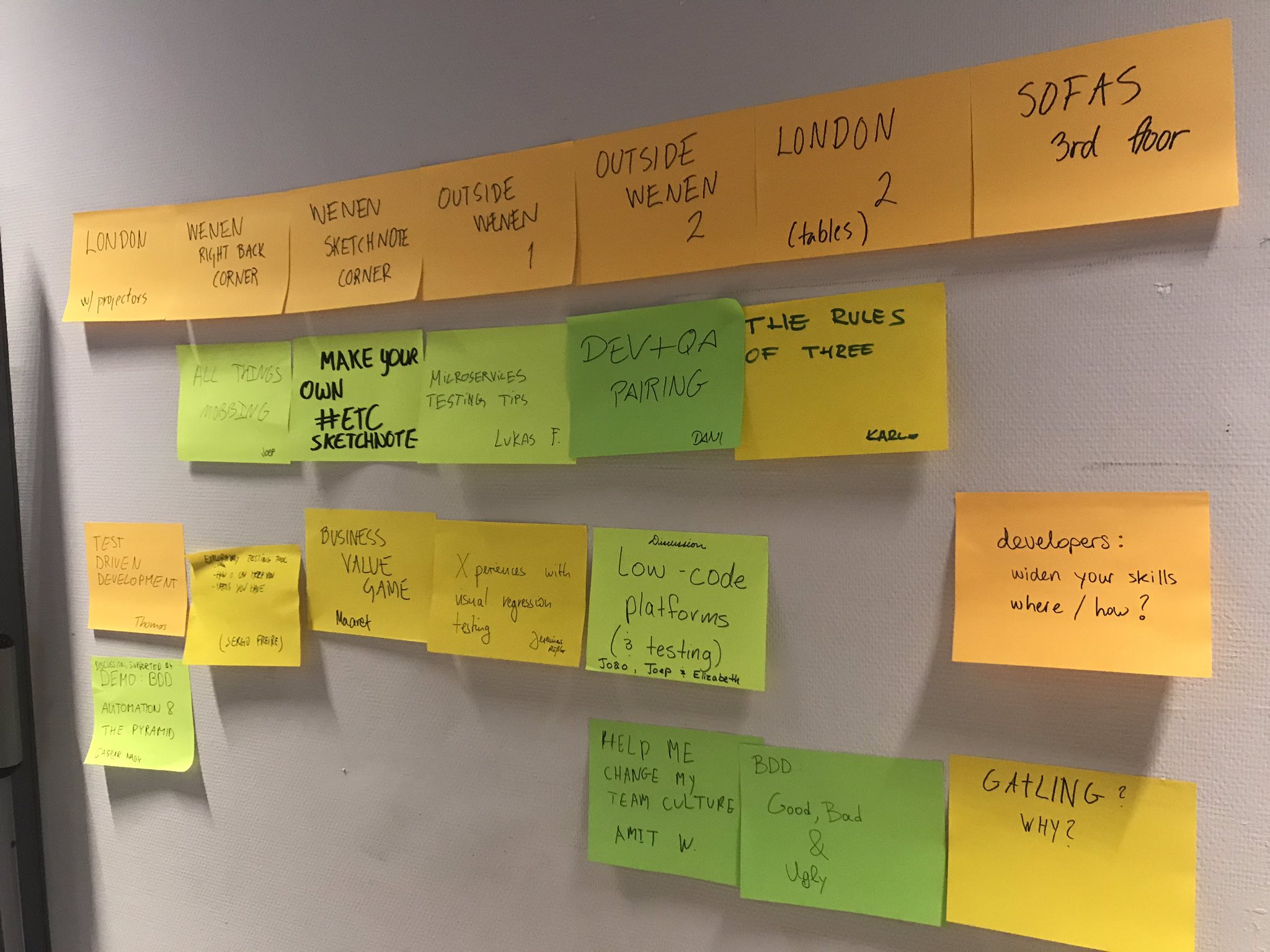 EuroTestConf has its own mini open session conference. We got three 30 minutes slots and eleven locations. I attended The Rules Of Three, Fizz Buzz TDD in mob-style, and BDD demo.

An unconference style is when participants create a topic schedule. We first put our topics on the wall with post-its. After that, the audience votes on topics of interest. Topic ranked by votes got their session slot, and the proposer is the moderator for the session.

The Rules Of Three

That session was my proposal. In my software testing journey, I found a lot of rules of three. So I wanted to discuss this type of rules and heuristics. Only Gaspar showed for the session, and we had a profound and exciting conversation for a full-time slot! I wrote rules of three that I know on white-sheet:

My question was, why precisely three? Why not four, five, or two examples of something.

Gaspar said that we know that our short memory buffer could store up to seven +/- two items, so definitely there is an upper boundary. Excellent presentations have three main topics. This is essential to have a unique presentation. In school, we write notes about the lecture, and later we read them. Our brain could better store information that is processed in three ways: listen, write and read what you had written.

In writing BDD Gherkin scenarios, Gaspar concluded that three Givens are enough. More would clutter a scenario. Gaspar grew up with brother and sister. And that number created an uneven balance that helped them to stop some of the children’s disputes. And that imbalance created a new thinking.

Fizz Buzz is a simple algorithm where we print Fizz if the number is divided by 3, Buzz if it is divided by 5, and FizzBuzz if it is divided by 3 and 5. Thomas Rinke (@thomrinke) proposed this session. We started in a TDD manner with the test when input is number one. I started as a driver and made an immediate mistake. I started work without navigator instructions. We had 2-minute time slots. For me, the best thing about mobbing is that when you are the audience (not navigator or driver), you could compare your problem solved with the navigator. This is a compelling learning method.

This session was held by Gaspar. He explained that the test automation triangle was not about automation! It was actually an author’s explanation of web application architecture. We have UI and units (modules), and services bring them together. That is it. And BDD tests are used as working proof that the system is doing what the user expects from it.

Conference And Learn Day 5, How To Give And Receive Feedback

Conference And Learn Day 5, EuroTestConf, The End Of Journey